If you’re a subscriber to Sling TV, DirecTV Now, Netflix, or any other streaming service and find yourself hardly watching cable anymore, why are you still paying for it? You don’t need to pay for cable if you only want internet. It’s actually a lot cheaper than you might think. The “cable bundle” is a thing of the past and we’re here to show you why.

How to get internet without cable

The biggest issue with internet in the United States is the lack of competition. Some locations have a few choices for internet, but others have virtually none. Even if your location does have a few choices for internet service providers, that number can be further reduced by how many you’re aware of. The smaller providers typically offer the cheapest services, but their marketing budget is also smaller. That means that major companies like Verizon or Comcast can bully subscribers into paying higher prices than the market would usually dictate. Thankfully, there are online databases that will show you the cheapest way to get internet without cable all across the United States.

How to find cheap internet

Our favorite site to find cheaper internet is BroadbandNow. BroadbandNow maintains a database with thousands of different internet providers and maps their location availability. This means that the marketing budget of the internet provider doesn’t matter and you can easily find the best deal. The screenshot below shows the results when we input our Boston office’s zip code into the search bar. 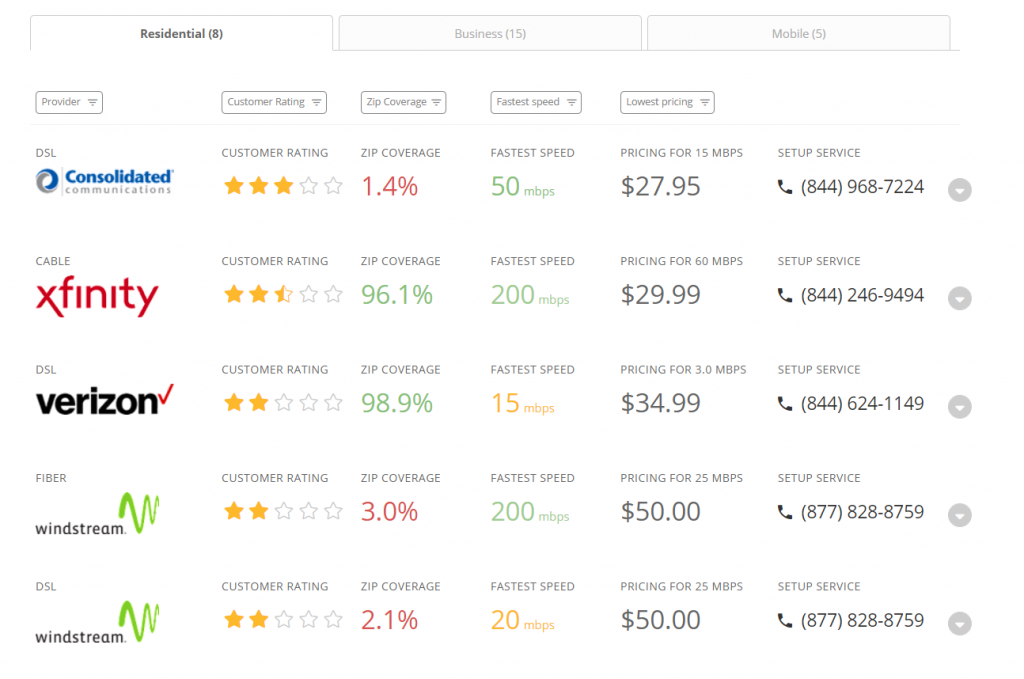 Boston, being a major city, has the benefit of a lot of different options for internet providers. Your specific results may not have as many options, but the information will be the same.

The best part about BroadbandNow is the sheer amount of data that it offers. As you can see from the picture above, they organize everything into a table to make it easily comparable. You can quickly see which option is the cheapest or has the best customer rating (don’t focus on this column too much; none of them have good ratings.) When comparing the pricing, make sure to pay attention to the note above the price that shows the speed that the pricing is for. Comparing 25 mbps internet speeds to 1 g speeds isn’t going to do you much good. 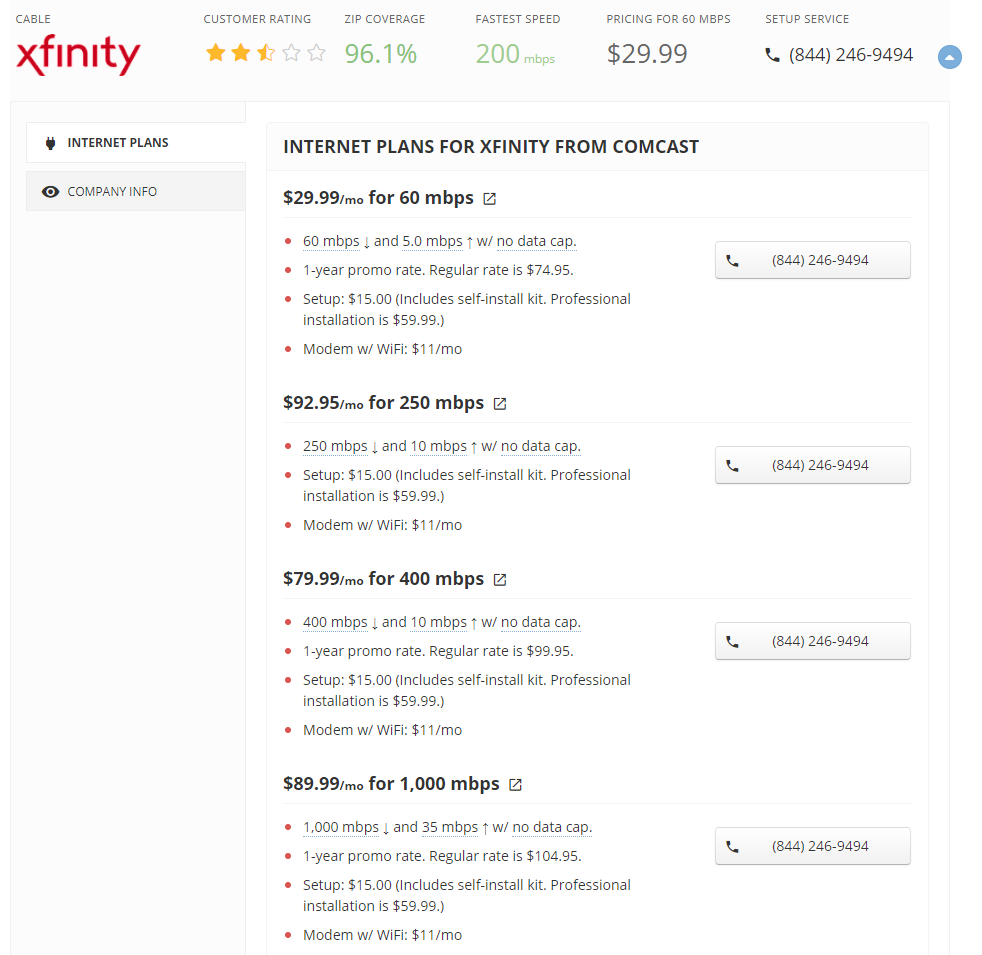 If you click on the arrow to the right of a service you’ll see a further explanation of the provider’s offerings. If they have multiple packages, you’ll be able to compare the speeds and cost for each one. When you compare two different services, make sure that you’re comparing prices for similar speeds so that you’re not comparing apples to oranges.

They’ll even show you any shady price changes that the cable companies like to hide in their two year contracts. In our example above, you can see that Xfinity costs $29.99 per month for the first year before it increases to $74.95 a month for the second year. The $29.99 price may look enticing, but with a two year contract and the midway price change it’s not accurate. The real monthly price for Xfinity’s 60 mbps plan would be $52.47 a month (29.99 + 74.95 / 2) . It’s a scummy thing for the ISPs to do, but it’s become common practice for some reason. This number doesn’t include the setup fee or modem cost, but BroadbandNow tries to make those clear too. The only other thing they could offer is a script or Advil to make calling the cable companies slightly less painful.

Although they include as much information as possible, BroadbandNow can’t tell you exactly which service is the best for you. You’ll have to determine that for yourself based on your required internet speeds, budget, and any previous experiences you’ve had with the service. You might also be in a situation where your options are even more restricted than the site assumes, such living an apartment building that only services a couple providers. They do the best they can to show you everything you might need, but ultimately the decision is up to you.

What internet speed do I need?

Before you overpay for super fast internet that you don’t actually need, you should confirm your speed requirements. The requirement for your house is based on what you’re doing with your internet as well as how many people are doing it. If you have a house full of gamers that play games while also watching a stream, your required speeds are going to be a lot higher than someone who only has one stream going. We contacted a few of the major service’s customer representatives to confirm required speeds based on number of devices. A summary of our findings is below:

What internet speed do I need for Sling TV?

What internet speed do I need for Netflix?

Recommended internet speed for other activities